What is an AR Dust Cover For?

Lets get to it, just the basics

The AR platform was made to be accurate and functional in a wide array of environments.  A common argument between gun enthusiasts is the accuracy versus other popular platforms such as the AK platform.  Proponents for the AR Rifle argue that the AR is more accurate than the AK, while AK proponents argue that the AK is more reliable because of more tolerance for dirt/debris.  This tolerance in the AK platform chamber generally leads to larger MOA specs (less accurate) for the platform, and gives the AR platform the advantage.  The downside of the tighter chambers is less tolerance for dirt and debris.  Welcome the AR Dust cover, or ejection port cover.  This small flap of metal is used to keep dust and debris out of the bolt/chamber area when the rifle is in transport or not actively firing in order to increase the reliability.  We will discuss below in detail the standard mil-spec AR dust covers, keeping in mind there are many parts out there that are not mil-spec and are imported, so the quality may vary.  Always keep in mind imported parts a usually a lot cheaper, so if the price is too good to be true, it probably is imported...

What are the components of an AR dust cover? 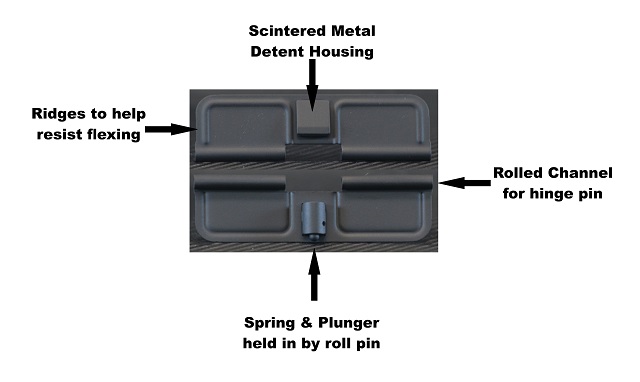 The ejection port cover is a very simple device, but there is actually quite a bit of engineering that goes into making one properly and meeting mil-spec guidelines.  The standard OEM cover is made from  cold rolled stamped steel and then goes through a heat-treating process, followed by manganese phosphate coating, to give it the familiar black finish you see on most AR15 firearms.  The detent housing is created through a process using  powdered metal sintering, where powdered metal is heated to near the melting point, and pressed into a mold to create a hardened and stable product that can handle the stress and impact from the bolt striking the housing to open the port door.  The detent housing is assembled from there with a plunger, spring, and roll pin to hold it all in place.  The detent housing is then crimped once installed in the stamped door to hold it in place.  All in, a very simple part that many of you might not have even considered the engineering on the back end to make it work.

Now that we have covered the actual ejection port cover, there are a few other parts involved to keep it attached to your upper receiver.  Starting with the hinge pin.  Mil-Spec pins are turned Chrome Moly steel, with a groove cut in for the clip, and finished with heat treating and a manganese phosphate coating. This gives you a very solid and hard rod that won't bend or rust.  Properly finished and heat treated rods are generally a black color, if you get rods that are clearly brown, they likely weren't heat treated or phosphate finished, not a big deal on this part, just something to be aware of with the plethora of aftermarket AR parts out there.  The c-clip that holds the hinge pin in the upper on the AR15 platform is carbon spring steel, with a manganese phosphate coating as well, and if you have ever struggled to put one on, you know it is a tough little part, that one installed, will not just fall off.  Many of you will notice that on the AR10 platform, although not as standardized as the AR15, the hinge pin does not have the groove in it for a clip, that is because the pin is held captive in the upper on one side, and held in on the other by the barrel nut.  There are also 2 different specs when it comes to the hinge pin on most standard AR10s, there is a long and short, so make sure you are aware if you need the long pin, we usually only carry the short pin.  Lastly, the spring that provides the energy for the all familiar opening of the dust cover when you pull back the bolt.  Most of the springs are made from carbon spring steel, there are some other spring compositions available like stainless steel.  The most notable aspect of the spring is it must be installed in the correct orientation, or you may experience the cover opening unintentionally.  The short end goes on the left against the receiver, and the long end goes to the right against the cover keeping it open.  Flip this around if you are a southpaw and installing it on a dedicated left handed upper where the cover flips up.

I bet you never thought that much about the common OEM AR ejection port dust cover and parts, but at least now you know the basics of one of our favorite parts to personalize and can make a more informed decision when it comes to selecting parts.  Whether you are looking for badass designs, patriotic designs, meme designs, caliber markings, or something truly personal, we have you covered at customardustcover.com